Review: THE DARDANELLES by Richard Freeman 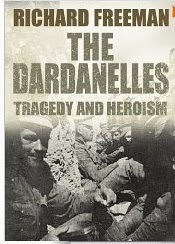 I review books for Endeavour Press, which publishes a lot of history. I love history, and World War I aka The War to End All Wars, is one of my favorite time periods.

Recently, I read THE DARDANELLES by Richard Freeman; here's my review:


Gallipoli. The Dardanelles. In many ways, these names evoke one of the most disastrous events in an entirely new kind of disastrous war. But who was to blame for the tragedy of the Dardanelles campaign? In Richard Freeman's fascinating, detailed and downright horrifying book The Dardanelles: Brilliant Conception and Tragic Failure, it's clear that nearly everyone involved must share culpability.


Churchill was blamed for forcing the idea of invading the Dardanelles on a reluctant War Council, though in fact he didn't agree with Kitchener about the importance of the campaign.


Lord Kitchener, for all his popularity, was used to a far different sort of war.


Vice Admiral Carden, Commander of the Mediterranean Squadron, was ordered to bomb the Turkish forts to submission in order to clear the way for ground forces; the admiral was weak, elderly and sent vague reports about the Turkish resistance being 'reduced', though in fact little damage could be done from guns created to fight other ships and not forts situated high in the hills.


Sir Ian Hamilton, the general in charge of the ground forces, was sent out from London at a moment's notice, with no plans, out of date maps, no staff, and a supply system that was ludicrously inadequate. When he begged—again and again—for more troops and more ammunition, Kitchener and the War Council ignored his pleas, or else responded with too little, and far too late. And as the casualties mounted, horror grew back home.


Freeman's prose is clear and eloquent as he demonstrates again and again how badly things were managed…and how hideously British and ANZAC soldiers suffered due to this mismanagement.


A powerful, intense, almost day-by-day description of one of the most famous and bloody campaigns of The Great War. Highly recommended.