We Interrupt This Program….

….for a review of GILDED CAGES, a steampunk romp by your humble servants, also known as me, K.G. McAbee, and my brilliant co-writer, Cynthia D. Witherspoon. The review is by Billy O’Shea, obviously a perceptive reader, who is a writer himself.


What do fans of steampunk want from a novel? Chances are they’ll find it in Gilded Cages by K.G. McAbee and Cynthia D. Witherspoon. It has adventure, action, mystery, suspense and a cast of characters who, while certainly classic steampunk types, are well drawn and always interesting. First of all, we have a pair of professional thieves: the formidable, multi-talented airship pilot Lady Abigail and her honourable if slightly slow-witted sidekick Simon Thorne. Then there is a ravishing French witch, around whose fate the plot revolves, a dependable manservant, and of course a dastardly villain, Henri d’Estes.

The action moves from England to France, Portugal and Egypt, and unlike some steampunk writers, McAbee and Witherspoon seem to have done their geographical and historical research well: the reader feels genuinely transported to the locality and time in question. The writers clearly know their shirtwaists from their charabancs. Each chapter is told from the perspective of one of the various characters, which adds an interesting touch to the narrative: no-one knows everything, but everyone knows something, and clues to the mystery gradually emerge.

The book is of course Victorian in style but easy to read, without the language seeming forced or false. I also enjoyed the tongue-in-cheek tone, the Wildean repartee, and the humour that arises in the clash of characters from quite different social backgrounds. The foppish Simon exclaims: “Electricity. It will never catch on, for I'm sure it's merely a fad. Gas light is so much more flattering to the ladies.” Bored to distraction on board a Nile cruiser, he is soon “ready to wrestle a crocodile or, perhaps, watch the stout lady do so while taking bets as to who would devour whom.”

In the final chapters, however, the story takes an occult and horrific turn that is quite unexpected, but deftly handled.

The authors are highly experienced writers, with a list of publications as long as an airship. On the cover of Gilded Cages, they promise “A thrilling tale of romance and derring-do, death-defying adventures and dangerous escapades”, and that is exactly what they provide.

I thoroughly enjoyed this book, and if you like steampunk, I can give Gilded Cages my warmest recommendation.  ~Billy O’Shea @ Goodreads 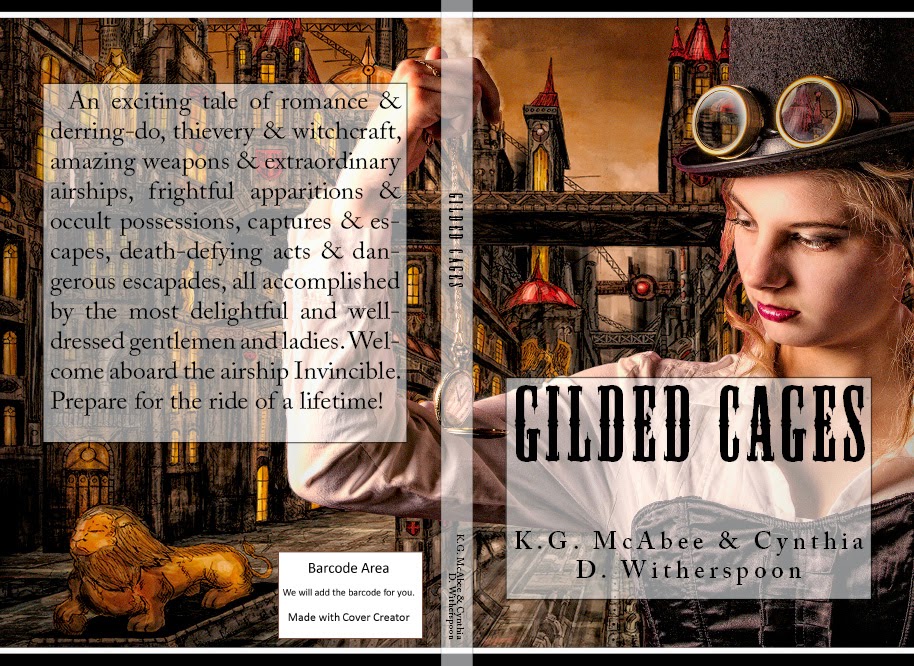 GILDED CAGES is available as an e-book at Smashwords, Barnes & Noble and other fine retailers, and will be available in print soon at Amazon.
Posted by KGMcAbee at 8:17 AM