Coming Soon: My First Attempt at a Regency romantic suspense!

You guys know me: I write horror and science fiction and pulp and fantasy and westerns and mysteries and suspense and comics. But I don't write romance. Not that I think there's anything wrong with romance, of course. I read more than my share of Victoria Holts and Mary Stewarts back in the day, not to mention getting plenty irritated with Marguerite Blakeney and how she treated Sir Percy. Honestly, was that woman too stupid to live or what?


My brilliant co-writer, J. Kirsch, writes killer romance. And there are certainly romances in a lot of my work. Of course, generally there are swords involved, or rayguns, or monsters. Or all three. And zombies. And evil wizards. And more zombies. And occasionally, my characters end up in each other's arms. Granted, more often they end up in some reeking, hideous, ravenous creature's maw, but the thought's what counts. Right?


So anyway, I decided I needed to stretch my wings, throw caution to the winds and see what else I could write. I'm a proud, card-carrying history geek, especially of all things English-history related. I love Baroness Orczy's Scarlet Pimpernel, as you can tell from my mention of poor Sir Percy and that wife of his, and I've always thought the time period from the Napoleonic Wars on into the regency of George IV was fascinating. So why not try writing a romance set in the Regency, just to see if I could?


So I did, and wonder of wonders, Rogue Phoenix Press is going to publish MISS MAYFAIR'S DILEMMA in May.


Kitty Carlisle was my brilliant editor, who whipped the manuscript into shape for me. See my previous post to recognize just how awesome she is.


Here's the cover, by the amazing Genene Valleau: 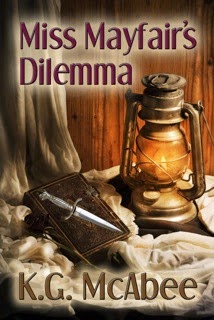 
Miss Patricia Mayfair is a wealthy, orphaned Regency bluestocking. While in London for the Season, Miss Mayfair spends more time buying books than ribbons, to the despair of her more conventional friend. Begrudgingly attending a dinner party, Miss Mayfair meets Lord Andrew Aragon, who fancies himself tired of London and the ton and never expects to fall instantly head-over-heels. But Lord Andrew is a notorious gambler, and Miss Mayfair has vowed she will never marry a man who indulges in such a vice. Can the leopard change his spots or the rake his habits?


And here's an early review quote:


MISS MAYFAIR'S DILEMMA is a Regency romance filled with likable characters, villains, love, and plenty of suspense. The characters are well developed, especially those of the greedy villains: Patricia's guardian and Lady Christabel. This is a very enjoyable read. Lovers of suspense as well as Regencies will find this a terrific tale. Besides, who can resist reading about a heroine addicted to books?  ~ Carol Durfee


We all need to step outside our comfort zones occasionally. I like to think that my monsters and zombies and wizards and space ships are none the worse for having a Regency romantic suspense added to their ranks.


And they'll soon have a Gothic suspense sister in the family as well…but more about that later.